Home Sports The History of Foosball
Spread the love 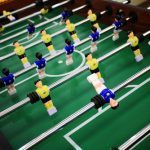 Foosball has become a much loved game that is played by everyone from celebrities to the average person, and its widespread appeal assures that few people have not heard of the game. Its origins are a bit more unclear than its beloved status since multiple people–and even counties–take credit for its invention, but this game of balls and paddles is fun and enjoyable regardless of its history.

The first official foosball patent is held by Brit Harold Searles Thornton, who patented the design in 1923; his nephew took the design back to the United States after visiting Thornton in 1927 and patented the design in the US. Foosball tables date farther back than the 1920s, however; in fact, patents for similar games were filed as early as the 1890s. The French, the Belgians, and the Spanish also take credit for the invention of foosball, but the truth is probably that multiple people came up with the same concept around the same time. Regardless of the specific origins of foosball, the game clearly originated somewhere in Europe.

While variations of foosball existed in the late nineteenth century, the game itself did not become popular until the 1940s. Some people attribute this surge in foosball popularity to Allied troops learning to play the pastime during World War II; this is a plausible explanation as foosball was and still is an excellent way for injured soldiers to regain coordination. The world also seemed to shrink a bit in the ’40s as WWII and increasingly advanced technology continued to bring people closer together.

Foosball competitions came into vogue in the late 1960s and early 1970s when American Lee Peppard began hosting high-stakes tournaments in order to promote his version of the foosball table. The “Quarter Million Dollar Tour” of 1976 took place in 32 US cities and offered individual purses ranging from $1,000 to $20,000 per victory. That year’s championship boasted a $100,000 purse, and the tournament reached its zenith in 1978 when the purse was $1,000,000.

The advent of video games diminished interest in foosball, although the game still remained popular in homes and arcades. Its relative simplicity meant that anyone could play it, making it a great family game for people of all ages in spite of the rise of video games. While the game’s prominence decreased in regards to professional tournaments, professional leagues continue to run today, particularly in Europe.

Today, foosball is played everywhere from millionaires’ mansions to frat houses. Most Americans have played this game at some point, and many families have or have had access to a foosball table. Many different types of foosball tables currently exist; some are cheap and smaller while others are larger, better made, and more expensive. Tables can have different player configurations, different methods of ensuring continuous ball movement, and different numbers of paddles.

Video games have only continued to increase in popularity, yet many people still have a fondness for foosball. Some people have managed to combine the two, creating robotic foosball players against which humans can compete. Most of these robots are not as good as human expert players, losing 10 rounds to the players’ 1. Progress has also been made in table construction in Europe, attracting more fans overseas who enjoy playing on the new tables. Foosball may be a game with old-school appeal, but that does not mean that this fun and challenging game will fail to adapt to new conditions and for new people.

Ultimately, foosball’s appeal rests not in its history but in its nature. The game appeals to everyone because everyone can play. The game’s premise is sufficiently manly for fathers and sons, but mothers and daughters can join in on the fun since skill can best strength. Parents who wish to bond with their children should consider purchasing a foosball table that will delight their children for years to come.